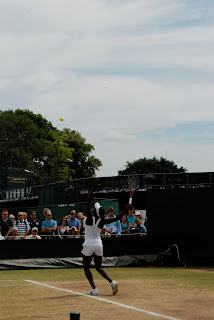 My first memory of the All England Club was in 1980. I was six and the whole family was watching Bjorn Borg v. John McEnroe in the tv room. I was enthralled and cheered one point quite loudly until the chair umpire insisted, "Quiet, please." I settled down, embarrassed, because I was the gauche American in the midst of this proper English's championship.

The 2010 Championships at Wimbledon saw tennis' longest match, Her Majesty, the Queen's first visit since 1977, and singles titles won by Serena Williams and Rafael Nadal.

On day 10 of the tournament, I had the opportunity to visit and as I made my way on the tube I hoped I'd be able to get in. Wimbledon has a queue that some sit in for days in order to get tickets to a match, or a grounds ticket to access the outer courts and Henman Hill. But on a day when the ladies semis were to be played on Centre Court, there was no one in the queue and I was able to walk right in and buy a Court 1 ticket. 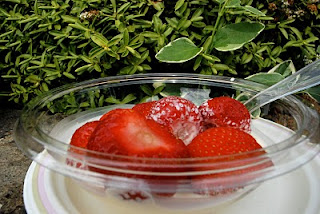 There I was, at Wimbledon, with it's grass courts and wooden net standards, chalk lines and all-white dress code. I walked past Court 18 where the marathon match had just been played. I toured Henman Hill and sampled the strawberries and cream everyone ate and the Pimms everyone sipped.

On Court 8 I caught a young American in her girl's singles match. Sloane Stephens was late and I was able to take in just how many people crowd a court at Wimbledon: 6 ball boys/girls, 7 line judges and one chair umpire. Plus, on the outer courts, the scoreboards are turned by hand, so two scoreboard keepers, one on each end of the court. Stephens hit hard, exhibited a bit of a temper and had several opportunities to win but ended up losing in three sets to Kristyna Pliskova 4-6, 6-1, 9-7. 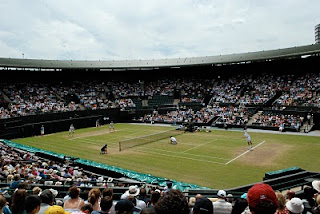 I spent the rest of my day watching a 5 set men's doubles match (Melzer/Petzschner defeated Moodie/Norman 7-6(3) 6-3 3-6 5-7 6-3) and then strolled across the grounds, catching scores from Centre Court, and snippets of junior's matches. Throughout the day, either in the stands at Court 1 or standing alongside one of the outer courts, and the chair umpires demanded just as they had thirty years ago, "Quiet please."
Posted by Noriko Nakada at 11:11 AM