NFL 2017 Season: Taking a Knee and Taking a Stand

I was in the middle of my junior year basketball season when Operation Desert Storm began. It was then, as I stood for the National Anthem as a player, followed by "Proud to Be an American" (a song many of opponents played before games to show support of the troops) that I considered turning my back or sitting down before the game. My parents probably would have supported me, and some of my teammates. I know I would have met hostility from the crowd (if they even noticed my protest) but for several weeks, during every playing, by a band or something prerecorded, I stood there, wishing I was more brave, expecting more of myself. I didn't sing along or salute during this time when I disagreed whole-heartendly with our country's military action, but I didn't take a knee. I stood at attention.

I haven't been watching the NFL this season. I was inspired by this Cowboys fan who isn't watching until Colin Kaepernick has a job.

Some of you might think boycotting the NFL is no big deal. Maybe you don't watch it, or maybe you turned your back on the league long ago. That would be understandable, but until this season, I still watched. In our home, the NFL is tuned to the Red Zone every Sunday, and it's Sunday Night, Monday Night, and Thursday Night Football. But with Kap out of a job, and the league still not taking care of its aging players, (this ESPN article captures the realities NFL families face in retirement) it felt good to take a stand this season, to say, "No, I can't watch this game knowing that the league's owners and management care so little for its players."

And then Trump decided to put his two-cents in during a campaign speech. 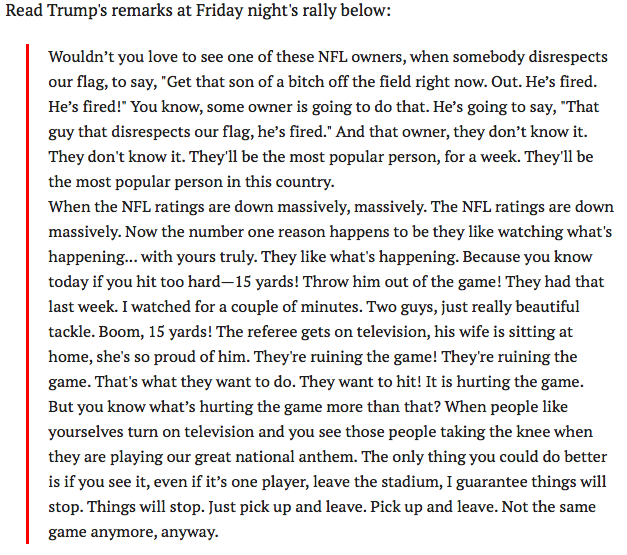 So, this week, what is it, week 3? I still didn't watch, but I am proud of all of the players who #StandwithKap and #TakeAKneeNFL because police brutality in America must be addressed. Our country needs to do better. It isn't about the flag. It isn't about the military. This is about a country that is denying life, liberty, and the pursuit of happiness to Black Americans, and if you boo people exercising their right to protest, if you don't understand why this is important, you haven't made an honest effort to consider what it is like to be Black in America. They are taking an enormous risk, and knowing how I struggled to take a tiny one as a high school athlete, I doubt they are taking this lightly. Just listen to Dolphin's Safety Michael Thomas.

Posted by Noriko Nakada at 5:57 AM