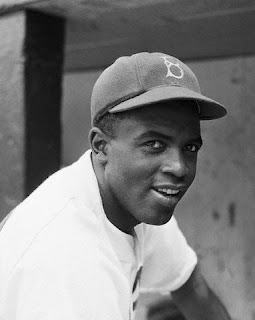 It helps that #42, Jackie Robinson, was a Dodger, but I'm pretty sure he'd top my favorite all-time ballplayer list (along with Roberto Clemente) because I'm a sucker for athletes who stand up for their beliefs both on and off the field.

He won't be playing tonight, but I love how Carlos Delgado stood up for what he believed in by not standing for God Bless America at the start of the Iraq War.

Today I think the player who captures Jackie Robinson's spirit the most is James Loney. Not only is he a Dodger and an RBI alumni, but he continues to give back. He was granted the club's Roberto Clemente award for his community service project which brought young RBI players to Dodger Stadium.

Who is your modern-day Jackie Robinson?
Posted by Noriko Nakada at 6:05 PM