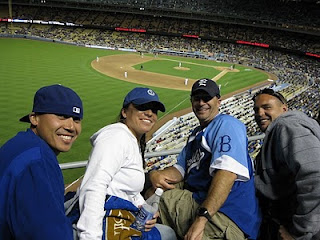 There are so many great things about going to the ballpark and this past week I got to spend two consecutive nights in Chavez Ravine at Dodger Stadium. It's early is the season but the Dodgers are off to a rough start. They've lost every road series and head back to LA after dropping 2 of 3 to the Nationals and being swept by the Mets. 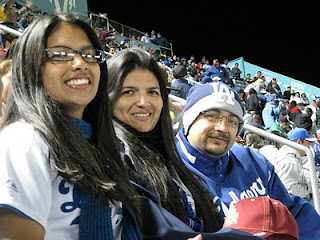 They're happy to be home and I'm happy to be driving to the Stadium for the first time this season. I sit with students, families and colleagues from the Emerson Sports Academy high above left field as the wind whips through the stadium. The Dodgers, however, continue to play like they're still on the road. The Pirates score 2 on a Matt Kemp error in the first and neither team scores for the rest of the night. All of those zeros lined up on the scoreboard depress me but for many of my middle school students, this is their first Dodger game and even though the home team loses 0-2, being there is enough.
The next night a friend hooks us up with field level seats just behind the dugout club. It's UCLA night at the 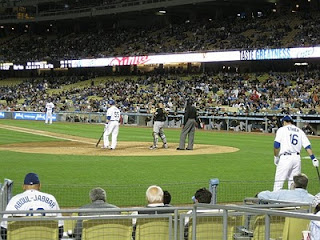 stadium so I get to look over Kareem Abdul-Jabbar's shoulder at the Dodgers warming up in the on-deck circle. The wind dies down and before the sun sets the 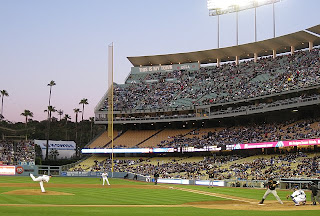 Dodgers score two and don't trail for the rest of the night.

I'm off to the Ravine for another game tonight and the great thing about baseball is that anything can happen. You never know what might happen on any given night, on any given pitch. It's what keeps me watching even when my team hovers below .500. You never know what you're going to see so you better pay attention or you just might miss something amazing.
Posted by Noriko Nakada at 4:01 PM