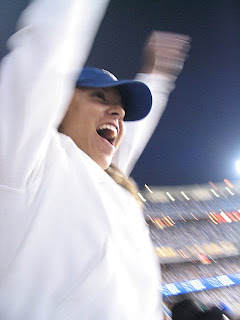 D and I have seen a lot of amazing games. Many of these moments happened on the road. In 2002, on our honeymoon tour, we watched Dodger pitcher Odalis Perez throw 6 1/3 perfect innings in New York against the Mets. In Milwaukee, we saw a walk-off hit from young Prince Fielder. But we've witnessed some remarkable baseball moments in our home ballpark. Here are my top five.

5. Chan Ho Park giving up two grand slam home runs in the same inning to Fernando Tatis. Not a proud one, but I still remember sitting in the stands saying, "Two grand slams in one inning, that has to be some kind of record."

4. The end of Eric Gagne's consecutive saves streak. I was there with D and my sister and niece who were in town from Oregon. Dodgers ended up winning but as we left the ballpark I had a hard time explaining to my niece why D and I were so sad.

3. It was a warm September evening in 2001. I don't remember who the Dodgers played or if we won or lost. I do remember the American flag stretched across the outfield by members of the LAPD and LA Fire Department. Airspace remained closed so the sky was still as Vin Scully asked all gathered in Chavez Ravine to take a moment of silence. In the quiet of Dodger Stadium, we started healing. 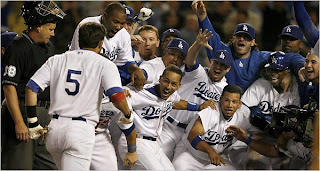 2. One of Nomar's many walk-off hits, but it wasn't a homer, it was a little squib up the first-base line that stayed fair. Then he ran and put on a poncho to kick off Los Doyer's Cinco de Mayo celebration.

1. Four consecutive home runs in the bottom of the ninth and a Nomar walk-off in the bottom of the tenth to beat the Padres. It was fleece blanket night but most of the fair-weather LA crowd left with the Dodgers down four in the ninth. Those of us who stayed belted out "I Love LA" and gave high fives to strangers because we were there to see that game.
Posted by Noriko Nakada at 10:13 AM