Wait 'Til Next Year 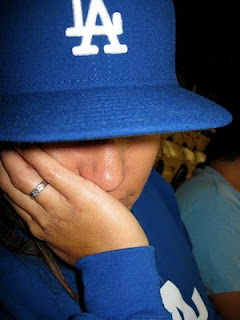 Even though the Dodgers haven't won or played in a world series since I've lived in LA, I'm realizing how spoiled I've been over the past few years.  We've been to the stadium a couple of times this past month and D still has tickets to a couple of games this September.  We'll go, enjoy Chavez Ravine, eat some Dodger dogs and peanuts, but we know what we've known since the start of August-- it's over.

There will be no Steve Finley play-off clinching grand-slam like in 2004, no magical September evening with back-to-back-to-back-to-back homeruns topped by a Nomar walk-off like in 2006.  No win streak is coming from Manny being Manny (at least not in LA) and Andre Ethier's late inning heroics will be unable to salvage this season.

So this Dodger fan, like so many generations of Brooklyn and Los Angeles fans before me, will be heading for the ballpark knowing once again we'll have to wait 'til next year.
Posted by Noriko Nakada at 3:50 PM