Finally! The Oregon Ducks Win the Grandaddy of Them All! 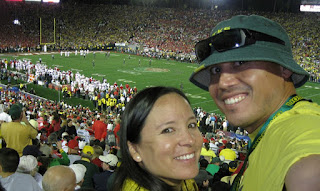 2012 has already started off so much better than 2011. Last year there was the nasty taste of the Natty loss in Arizona and that Cam Newton smile. This year victory was finally ours. And what a game. I mean, really, that was a great game with all those lead and momentum changes, big plays and big hits. It was stressful, for reals, but winning the big game is so much better than losing and Oregon knows from their last two BCS Bowl games how much losing hurts.

But after the dust settled around the game, and I looked back at the fan experience I must say the beautiful Rose Bowl is a far superior venue to the cement-covered stadium in Phoenix. The tailgating and the Southern California weather make for a perfect game day. The thing I'm not sure about though is why I liked the Wisconsin fans better than the Auburn or Ohio State fans. Maybe it's because we beat them or maybe they actually are nicer. The Ohio State fans at the Rose Bowl two years ago were pompous. The Auburn fans at the National Championship game represented the SEC well with their loafers and their, "You know, football, it's a way of life down here" mentality. But the Wisconsin fans were pretty nice. They didn't talk smack. They cheered appropriately. They lost with dignity. 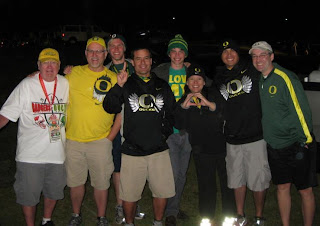 To my surprise, the people who drove me crazy at this year's Rose Bowl were not the Badgers. It was the SC fans. I know some nice USC fans. I know they exist. But ever since Oregon lost to SC some of the more obnoxious SC fans have NOT SHUT UP. They insist they are so much better than the Ducks and they are the real Pac 12 champs. I know you beat us, Tommy Trojans, but you also lost to Stanford and Arizona State. And sorry, guys, but you actually have to win the Conference Championship Game to claim this. I would have loved a rematch up at Autzen with SC in the inaugural PAC 12 Championship game. That would have been awesome. But instead we got the Bruins. So please, take your "Fight On" to some other bowl game. This year the Rose Bowl belonged to the Ducks!
Posted by Noriko Nakada at 4:39 PM